Tara: The Liberating Power of the Female Buddha

A conversation with Jungian analyst and psychologist Rachael Wooten on the power of a Tara practice and her connection to the female Buddha. 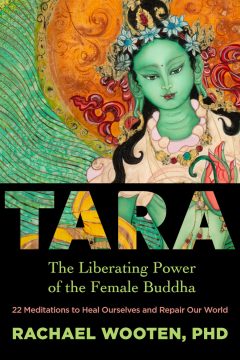 Jungian analyst and psychologist Rachael Wooten, PhD, has been interested in different spiritual traditions since she was a child. She has studied Buddhist, Jewish, Christian, and Indigenous teachings throughout her career. She received blessings from Mother Meera, considered by many to be a manifestation of the Divine Mother.

Her mentors have included Lodrö Tulku Rinpoche (founder of the Samdup Dölma Ling Tara Island Centre in Erlenbach, Switzerland) and Rabbi Zalman Schachter Shalomi (Reb Zalman), the founder of the Jewish Renewal movement. Under Lodrö Rinpoche’s authorization, Wooten has taught Tara meditation for more than two decades. Her book Tara: The Liberating Power of the Female Buddha offers a primer for developing a Tara practice.

Tara is considered a fully enlightened being in Tibetan Buddhism: a female Buddha. How did you discover her?

I grew up in a North Carolina in a town that had unusual religious diversity, with strong communities of Jewish and Christian families who were connected with each other through several generations. I was raised Methodist but as an adult, I sought out more interreligious experiences.

In the late 1980s, I was introduced to the Black Madonna in a seminar sponsored by the Guild for Psychological Studies, which triggered a new interest in the Divine Feminine. Shortly afterward, a friend sent me China Galland’s book, Longing for Darkness, Tara and the Black Madonna. That was my first inkling of Tara!

In 1992 I was looking for more depth in my Jungian training. I had a dream that clearly directed me to finish my training in Zürich—and also suggested that I could visit Mother Meera more frequently in Germany if I did so. I had learned about Mother Meera and was already planning to travel to Germany in the weeks following the dream.

During that trip, I was receiving darshan [blessing] with Mother Meera and the word “Padmasambhava” kept repeating in my head. I asked a friend about what this could mean and he told me that Padmasambhava was a person: “Go look him up!” I discovered that he was a Buddhist master from India in the 8th century and is credited for introducing tantric Buddhist practice to Tibet.

During that same trip, I applied to the training program at the C.G. Jung Institute in Küsnacht. I moved there after being accepted and eventually met Martin Kalff, an expert in Tibetan Buddhist teachings and practice. I told Martin about recent experiences with Tara and he said, “You need to meet the Lama [Lodrö Tulku Rinpoche].” When I met with Rinpoche a few weeks later and reported these experiences to him, he immediately said, “You must have had a connection to Tara in a past life.” I ended up living in Switzerland for more than three years, studying Tara and undergoing initiations into her practice, and have been meditating with her ever since.

Why Tara, rather than other forms of the divine feminine?

When I was introduced to Tara I had this intuitive sense that she could hold everything—my own darkness and fear, all that I don’t understand, and my longing for the Mother. She invites us to bring all of ourselves. The practice is very embodied: You’re focusing on an outer image that reflects an inner reality, chanting mantras that resonate in your body. It’s a powerful bodily experience.

I also responded to her origin story, of the Princess Yeshe Dawa. The princess was seeking enlightenment and monks came to her and told her essentially that she wouldn’t be able to attain enlightenment in this lifetime because she was female. They suggested that she transform herself into a man on the spot or pray to be reborn in her next life as a man if she wanted to attain her goal.

She then insisted, “Actually, my being female isn’t an obstacle to enlightenment at all, and actually I’m going to achieve enlightenment specifically in female form.” Westerners so often wrestle with insidious self-doubt—we’re not enough, not doing enough. But here’s this woman, who ultimately became a female Buddha, saying to the authority figures of her day: “I am enough, just as I am.” And by virtue of her conviction, so are we.

How might Tara practice fit into a person’s existing spiritual framework?

You don’t have to give up anything to do Tara practice. There are profound connections between the wisdom gained from this body of practice and wisdom I’ve come across in Christian, Jewish, and Indigenous traditions. When I’m doing Tara practice, chanting a mantra, looking at this image of an enlightened woman appearing in a subtle body of light—that is, that energy between our physical form and vastness of the spirit—my own subtle body is activated as well. I think this creates a similar effect as the Christian practice of centering prayer or practices in mystical Judaism: when you access the profound sense of space inside, insights come.

Something is fundamentally changing in the world: it’s less and less unusual to be multifaith. My mentor Reb Zalman borrowed Matthew Fox’s phrase “deep ecumenism” to describe how we need to incorporate other spiritual traditions into our own. As Fox says, there’s “one river but many wells.” Or in Reb Zalman’s own words, “You can’t get all your spiritual vitamins from one source.”

Is Tara practice only for women?

Not at all. In fact, as the Tara teachings migrated from India into Tibet, monks began doing her practice and have dedicated themselves to them for more than a millennium and up to the present time. She’s a manifestation of an inner reality that’s in all of us, the Mother of all Buddhas, and all of us need her nurturing presence.

Your book outlines ways to meditate with Tara. How would you suggest someone new to Tara practice get started?

One gentle way of tapping into Tara’s energy is to go outside, take in the greenness, be in the natural world. Another way to begin is to say her mantra—“Om Tare Tuttare Ture Soha”—when you’re meditating or even going about your day. Think about her image, and her posture: Her left hand is at her heart indicating her refuge, her right hand is open in a gesture of giving, while her left foot is in a meditation pose and her right foot is poised to spring into action. Tara means “swift liberator.” She’s always ready to help us.

Want to read more about Tara? Read The Dark Side of Forgiveness: The Goddess Tara.

Kate Madden Yee is a Bay Area-based freelancer, co-housing aficionado, and astonished mother of two college-age sons. She loves to write about women using their power and creativity to change the world.