A Buddhist Response to the Climate Emergency 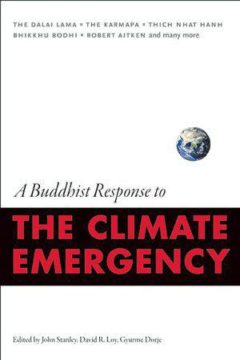 Eastern and Western Buddhist leaders acknowledge that our planet is in grave danger and are agreed on two things: that we must pray and that we must change. According to Chokyi Nyima Rinpoche, the head of Ka-Nying Shedrub Ling Monastery in Kathmandu, internationally renowned meditation teacher, and founder of the Rangjung Yeshe Institute for Buddhist Studies, “Religion may be the only motivational force as powerful as the big-business interests that are blocking constructive change.”

This volume presents the responses of teachers from varied Eastern and Western Buddhist traditions to the perils of climate change; they agree that Buddhists must take leadership to unite the world in action on behalf of the planet and all sentient beings. “Meditation alone is not enough,” says Ato Rinpoche, the eighth Tenzin Tulku and a master of both Mahamudra and Dzogchen. Citing greed as a pervasive root cause of the many problems faced by the world today, he says that “greed stops human intelligence from developing into wisdom, and human intelligence without wisdom becomes destructive.”

“What Buddhist teachers and practitioners can do now is demonstrate how we can break away from this culture of addiction,” said Dzigar Kongtrul Rinpoche, author, teacher, and founder of Mangala Shri Bhuti, an organization that integrates several retreat centers. “We will need inner discipline to break from it and choose a lifestyle of minimum needs and maximum contentment.” This attitude change will help the environment and is also an asset on the spiritual path.
The Buddha himself can serve as an example, in that he abandoned everything for the sake of enlightenment, and once he had achieved it, he took on a far greater responsibility for all sentient beings. Great spiritual masters like Padmasambhava believed the world to be illusory, yet he went to enormous effort on behalf of future generations.

Acknowledging that a wrong teaching on karma can cause people to fail to act in response to the suffering that climate damage can cause, Buddhists worldwide recognize that a bodhisattva cannot just sit in bliss and let everyone suffer; he or she must recognize the reality of collective karma and answer the question asked by Susan Murphy, the founding teacher of Zen Open Circle and a Dharma successor of Robert Aitken Roshi: “Can we really allow our astonishing living planet to die?”