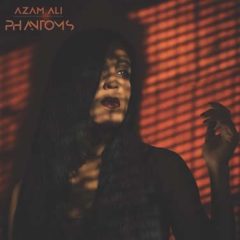 “We are stars shaped in the sea of life—abandoned dreams of a deserted sky,” Azam Ali sings on “Scattered Stars,” the penultimate track from her fourth solo album, Phantoms. “But we are stars the same and only know the way homebound, and nothing can take away our light. We are all stars from where there is no name.”

On one level, these words express a universal sense of estrangement from the divine Source. At the same time, they hold personal meaning for their singer, who was forced to leave her birthplace of Tehran, Iran, for India at age four. After moving to America as a teenager in 1985, she began making music that, in spite of its evident Middle Eastern influences, does not seem to originate from any specific earthly location.

While Phantoms is every bit as ethereal as Ali’s previous solo works and her recordings with the world music groups Vas and Niyaz, it marks a notable change of style for the vocalist/instrumentalist. With its synth-driven instrumentation and dreamlike aesthetic, it reflects her love of late 20th-century electronic and shoegaze acts like Portishead and Cocteau Twins, the latter of whose “Shallow Then Halo” she covers near the album’s end.

As well as being her first entirely self-produced effort, Phantoms is Ali’s first collection of songs that are sung completely in English. Her elegantly melancholic lyrics explore such aspects of spiritual humanism as the transformation of pain into high art and the effort to align one’s external life with the internal pull toward transcendence and universal love, while the album’s title refers to the physical, mental, and emotional vessels we develop in order to move through mortal life.

With the possible exception of “Tender Violet,” Phantoms’ melodies aren’t the kind that reach out and grab you. Rather, they float in the air like the wraiths from the album’s title, enveloping the listener in an otherworldly mist.