Music Review: The Gospel According to the Other Mary 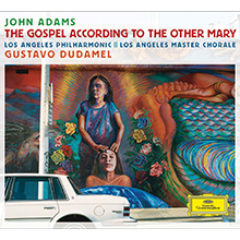 The Gospel According to the Other Mary: A Passion Oratorio in Two Acts
John Adams
Deutsche Grammophon

The Passion story—the story of the arrest and execution of Jesus—is always told with dramatic intensity and spiritual purpose. Each modern retelling has the potential to emphasize different aspects of Christ’s life and teachings. With The Gospel according to the Other Mary, the composer John Adams brings the tension of this story to a crescendo, with pulsing tones rising to chaotic peaks and falling again into dark vibrations of metallic gongs. Adams, with his longtime collaborator Peter Sellars, has transported this ancient biblical story of suffering, death, and rebirth into the present day, which is perhaps where it is serves us best. The Gospel according to the Other Mary connects Jesus’s struggles for political and spiritual liberation to modern Christian activism that serves the poor and agitates for economic equality and an end to war.

The oratorio opens with a jail scene, where a group of women have been arrested for protesting on behalf of the poor. Class and gender are immediately put in the spotlight, with women serving as central characters who struggle to transform society. Within this work is a call to confront social structures with the tireless spirituality-based energy of people like the labor activist Cesar Chavez, the author June Jordan, and Catholic Worker founder Dorothy Day, all of whom have their words and ideas appear as lyrics for the characters of The Gospel according to the Other Mary. The Los Angeles Philharmonic Association commissioned the piece, and Gustavo Dudamel served as music director.

The Gospel according to the Other Mary offers an optimistic message about the potential for spirituality-based social change: in act 2, Jesus “tears himself down from the cross, chops it down with an axe, and blazing with the phosphorescent colors of the New World, demolishes all hierarchies.

There are far, far better things ahead than any we leave behind. - CS Lewis