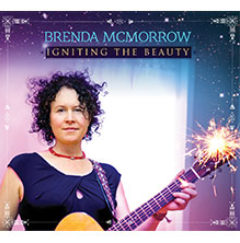 Brenda McMorrow played folk music in her 20s, but it wasn’t until 2004 that she was struck by the beauty and depth of devotional music. “A friend took me to a kirtan workshop. I didn’t know anything about it,” she told S&H. “My friend told me kirtan was a form of yoga and music.” McMorrow had done some yoga by that time but had focused on the physical health benefits of the practice. “There was one man with a guitar, singing mantras,” she remembers. “By the second song, I had the most profound knowing that this is what I was to do with my life. It was like a lightning bolt hit me. Never in my life had I experienced such a strong knowing about a direction to take. From that moment, I became focused on kirtan.”

That lightning bolt of discovery can be heard on McMorrow’s latest release, Igniting the Beauty. The album was produced by the well-established devotional music producer Ben Leinbach, who also adds guitars, drums, vocals, and bass to this uplifting and relaxing album of mantra music such as “Loka Samastha” and “Govinda Bolo.”

Indian guru Neem Karoli Baba first touched McMorrow’s spiritual path in 2008. She describes being visited by the deceased teacher a few years later, while playing at a festival in Italy. “It was almost like a darshan moment,” she told S&H. “I was filled with his presence, and it blew me away. From that moment on, he’s been in my heart. He’s been with me ever since.”