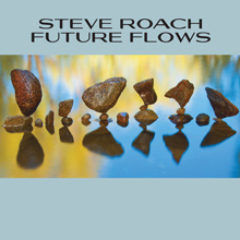 Time seems to slow down when you’re listening to Steve Roach’s new album, Future Flows. These 70 minutes of expansive, cascading soundscapes were created by Roach, known for one-of-a-kind multilayered synthesized timbres and textures, at the Timeroom, his personal recording studio in southern Arizona.

The opening track, “An Omnipresent Sense Prevails,” evokes the sensation of floating in space, or dreamily drifting in the warm salty water of an isolation tank. “Air Meditation” continues the dreamscape with suspended sounds, reminiscent of Tibetan bells, that ripple to the horizon. “The Future Flows from Here” is the final track, a celebration of the eternal present moment.

Roach taught himself to play synthesizers, and his first album, Now was released in 1982. Since then, he’s produced an extensive body of work with recordings that range from ambient and atmospheric to meditative and tribal. Many of his recordings incorporate drumming, but Future Flows is suspended in time partly because the beat is undefined.

Roach has collaborated with many innovative musicians over the years, including Mexico’s Jorge Reyes as well as the guitarist Robert Fripp and the drummer Jeffrey Fayman. Roach is also known for his evocative live shows that fill spaces like San Francisco’s Grace Cathedral with waves of timeless sound.