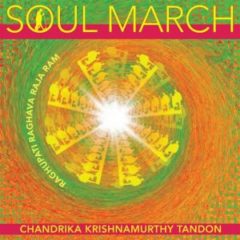 Two hundred forty miles. That’s the trek thousands of satyagraha activists made with Mahatma Gandhi during the 1930 Salt March to end the British colonization of India. Chandrika Tandon has dedicated an album to this powerful event, titled Soul March. It’s a follow-up to Soul Call, Tandon’s 2010 Grammy-nominated album in the contemporary world music category.

Tandon was born in India and first came to the United States in 1979 while cultivating a successful corporate business. But her deep love of music was never far away. “I restructured my life 10 years ago because I realized that the happiest moments of my life had to do with music,” she says. “When you have access to music and you’re not doing it for fame or fortune, when it’s really an expression of self, then music is a source of joy.”

With another album almost complete, Tandon says she practices meditation to support the flow of musical ideas. “Creativity is a process of quieting one’s mind and letting universal forces work through you.”

Soul March includes more than 75 musicians and is based on the classical Indian raga “Raghupati Raghav Raja Ram.” “It was beloved by Gandhi and sung during the Salt March,” Tandon says. “Soul March is a tribute to all people who seek freedom. Gandhi said, ‘Be the change you wish to see in the world.’ My philosophy is ‘Be the love you wish to see in the world.’ This music is about creating circles of love.”