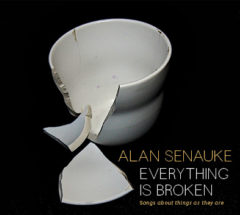 Songs about Things as They Are

Take a close look at the photo of Alan Senauke on his new album, Everything Is Broken, and you may notice a dark bump on the side of his head—the scar from a police baton is a reminder of his role in student protests as a young man. “Music and activism came to me simultaneously in the early ’60s,” says Senauke, a Zen teacher and former director of the Buddhist Peace Fellowship. “I started playing folk music because it was part of the cultural context of protest and peace work.”

Everything Is Broken is blues-based and Buddhist-infused Americana that was skillfully recorded and produced by Charlie Wilson at Sonic Zen Studios. “Blues is the music I relate to best,” Senauke says. “The blues is an articulation of suffering and the freedom within that; to sing and play even while suffering is part of life’s experience.”

The album includes covers of songs by Bob Dylan, Tom Waits, Muddy Waters, and others, along with original gems like “Not Always So,” dedicated to Shunryu Suzuki Roshi. “Our Hero” is based on the Buddhist Lotus Sutra and was written by Greg Fain and Ben Gustin at the Tassajara Zen Monastery. “They decided to write a song about this Bodhisattva character who is disrespected, scorned, and yet always returns respect and love because he sees that even the people who are abusing him are going to be Buddhas someday,” says Senauke.