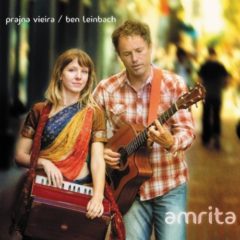 Prajna Viera has honed her golden voice by singing devotional songs for Amma, the humanitarian “hugging saint” from India who travels the world offering darshan in the form of loving embraces. Vieira’s album Amrita was co-created with Ben Leinbach, who brings years of production experience to this project, including past albums for Deva Premal and Jai Uttal, who sings on one song, “Sarvesam.”

It’s no surprise that the new album drips rich with devotional bliss.  Amrita is dedicated to Amma and includes traditional Indian instruments alongside Western instruments, including Vieira on harmonium, keyboards, and cello and Leinbach adding vocals, drums, guitars, and bass. Unlike many current Hindu-based kirtan-flavored fusion albums, Amrita is not a CD with techno-laced drumbeats; this is a devotional album for relaxing and reflecting.  Slower tempos with lush, layered production provide a cozy wrap for Vieira’s vocals. “Hari Om” is especially exquisite when Vieira lets loose, creating melodic poetry.

The mesh of male and female vocals with Vieira and Leinbach is luscious on  “Keshava Madhava.” The pair call to mind an imagined get-together between Natalie Merchant and Cat Stevens. And a quirky 12-beat rhythm with piano and drums captures the attention on a reworked version of the Sanskrit bhajan “He Ma Durga.” Amrita is surely not the last we’ll hear of Prajna Vieira and Ben Leinbach.