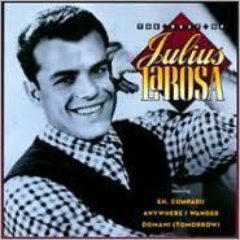 In pop music, the most notorious job termination was given in 1953 to the American singer Julius La Rosa during a broadcast of the then-popular Arthur Godfrey radio show. La Rosa, born in Brooklyn in 1930, had hired an agent, which the paternalistic Godfrey saw as personal betrayal, and the singer was discharged while an appalled radio audience tuned in. After this unprecedented public humiliation, La Rosa scored hits with his unadorned and direct baritone voice, which speaks truth with an unusual attention to the verbal resonance of lyrics. His credos on this CD include “I Believe,” written after the outbreak of the Korean War, when the U.S. public, barely recovered from World War II, urgently needed a message of hope and faith: “I believe, for every drop of rain that falls, A flower grows./ …Every time I hear a newborn baby cry,/ Or touch a leaf, or see the sky,/ Then I know why I believe!” La Rosa expresses similar faith in “Suddenly There’s a Valley,” another 1950s song that he delivers with conviction: “When you’ve climbed the highest mountain/ …Suddenly there’s a valley/ Where the Earth knows peace with men.” Where did La Rosa secure inner strength to surmount career difficulties? One source was his sturdy southern Italian heritage, which inspired him to write a buoyantly catchy hit “Eh, Cumpari!” which is also included on The Best of Julius La Rosa. Still performing in public today, La Rosa had a long career as a disc jockey and in 2008 was inducted into the National Broadcasters Hall of Fame. Few remember the once-mighty boss who fired him.