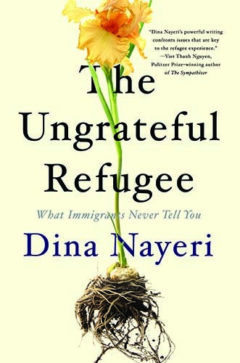 When do you leave? When do you stay? Which disaster—religious persecution, financial ruin, physical abuse—triggers the flight? In her searing new memoir, Dina Nayeri shares the story of her childhood exodus from Iran. Nayeri is a novelist and maintains a lyrical style even while writing of her harrowing trip out of the country, through a refugee camp in Italy, and finally to Oklahoma.

In our political climate, refugees are often demonized and blamed. They are called “illegals” and lumped into hordes, and even the kinder among us patronizingly expect refugees to feel grateful. Nayeri cracks the stereotypes open, writing about the indignity, the waiting in limbo, the attempts to feign nonchalance while being treated horribly.

Nayeri went on to study at Princeton and Harvard. But while she “had changed my face and hair, my friends, my education, my country and job, so often that my skin felt raw. … I had prided myself on being a chameleon, as many immigrant children do, but now I felt muddied by it—I felt like a liar.” So, in 2016, she began exploring her past by visiting refugee camps and talking with recent arrivals. She weaves these stories in with her own, broadening this compelling portrait.

In an Oklahoma church, a woman condescendingly told her, “You came for a better life.” Nayeri writes, “I thought I’d pass out—a better life? In Isfahan, we had yellow spray roses, a pool. A glass enclosure shot up through our living room, and inside that was a tree … life in Iran was a fairytale.” This book will challenge your assumptions and make you want to learn more of the stories of the world’s 25 million refugees.