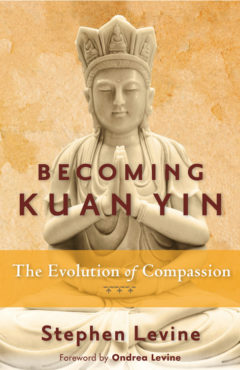 The Evolution of Compassion

Stephen Levine’s Becoming Kuan Yin tells of Miao Shan, the daughter of a spiteful Chinese king. When she wouldn’t yield to his wishes that she become the wife of a military officer, he banished her to a life of hardship and abuse in a convent and threatened to kill the abbess if she did not break his daughter’s will.

The young woman was given a windowless room, a stone floor for a bed, latrines and animal pens to clean, and stone walls to dust, which rained sharp tiny specks into her eyes. To the king’s angry surprise, Miao Shan thrived in caring for the hideously ill and suffering, emerging in history and myth as Kuan Yin, a female Bodhisattva—an enlightened being who turns back from nirvana to serve others on earth.

The first book in a decade for Levine (Who Dies?, A Year to Live), Becoming Kuan Yin is more poetic than didactic, an infectious fever dream of images and insights. Reminiscent of St. Francis, Kuan Yin drew wild animals to her even as a young girl, and she fed them by hand. These creatures—tigers, snakes, wild boar, wise carp, even pterodactyls and dragons—offer a menagerie of metaphors.

While her story holds elements of spiritual parable—Cinderella meets Mother Teresa—Levine mines it for contemporary reference points, drawing on the experience of service to the dying for lessons in compassion and forgiveness.

“Becoming” is the key to the reader’s relation to Kuan Yin: her challenges and transcendence a guide for less evolved souls to confront our own pain and doubts, to escape the illusion of our “selves,” to find in our own suffering compassion for the suffering of others.

This is a book you access through intuition as much as intellect, one to read again and again, struck by new awareness each time.