A Spiritual Hitchhiker’s Guide to the Universe 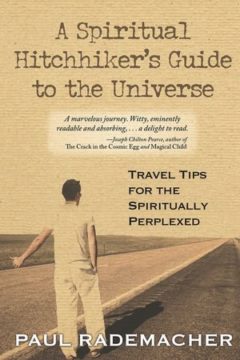 Paul Rademacher’s lighthearted and engaging memoir retraces the convoluted spiritual path that led him out of the four-walls church and into explorations of the intersection of consciousness and spirituality, the realm that Jesus called “the kingdom of heaven.”

Rademacher had been drawn to spiritual life from the time he was a child; he later earned his master of divinity degree from Princeton Theological Seminary and spent 15 years serving as a Presbyterian pastor, though he knew, from his first church assignment, that he was not in the right profession. With his questioning, honest mind and his fear of public speaking, the ministry tried him sorely; more important, the church did nothing to explain or encourage the transcendent experiences he had had while hitchhiking across the country as a young man. It appeared that there was no place in mainstream Christianity for the spiritual explorations to which he felt himself called.

Doctoral studies at the Ecumenical Theological Center in Detroit, Michigan, led to explorations of mysticism, meditation, and other spiritual practices, and he found himself having to live as an “undercover mystic,” unable to share with his congregation what had become the most meaningful part of his spiritual life. Rademacher then studied at the Monroe Institute — an educational and research organization that is world-renowned for its work in the exploration of human consciousness — left the traditional ministry in 2000 and, in 2007, became the Institute’s executive director.

Rademacher believes that the job of the church is to facilitate spiritual connection by helping people make shifts in their consciousness that will lead to unity. “Whole cultures have been brought to the edge of extermination because of the refusal to see what we hold in common,” he asserts. “It has often been mentioned that if a Hindu, a Muslim, a Jew, and a Christian could get together, they would argue endlessly about the truth of their respective traditions,” he says. “But if a Hindu mystic, a Muslim mystic, a Jewish mystic, and a Christian mystic were to converse, they would all find agreement. That is why the mystical tradition is so important. Peace will come when the illusion of separation ends.”