A Return to Healing 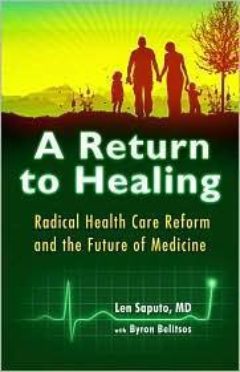 As the debate over health care reform grows increasing vitriolic and progress seems less likely, Len Saputo, M.D., offers a radical solution: “We need to put a graceful end to the commercialized disease care organism itself. This begins when we challenge its scientific assumptions from the standpoint of the new integral medicine model, while moving toward radically reforming its flawed systems of research, regulation, financing, and delivery. We say radical reform because the system is broken and the lives and health of millions of families . . . are now at stake.”

Among the deeper issues that have caused skyrocketing costs, poor results (U.S. health care quality now ranks only 37th in the world), and an epidemic of chronic disease, Dr. Saputo counts the failure of medical doctors to address less-than-optimal wellness before a disease process takes hold, as well as treating symptoms with pharmaceutical drugs in spite of known (and possibly lethal) side effects and risk of dependency, resistance, or addiction.

Dr. Saputo suggests a new integrative model based on a treatment hierarchy that gives priority to prevention and non-invasive treatments as the first line of defense. Such a model would honor the patient’s personal preferences and the sacred physician-patient bond, and would incorporate integrative or holistic practices, making it more cost effective. It would fund research that is truly objective and not influenced by corporate interests, require a thorough reform of the FDA, and take into account the social and environmental influences on health.

This book is necessary reading for all citizens, no matter what their current beliefs about health care reform. No one who understands the facts and statistics that Dr. Saputo presents can deny that action must be taken. No one who reads the personal stories of those let down by our broken health care system can deny that the time to take action is now.
Dr. Saputo is a graduate of Duke University Medical School, a board-certified internist, and founder of the Health Medicine Center in Walnut Creek, California. Byron Belitsos was educated at the University of Chicago, the California Institute of Integral Studies, and the University of California and is a widely published journalist and writer.