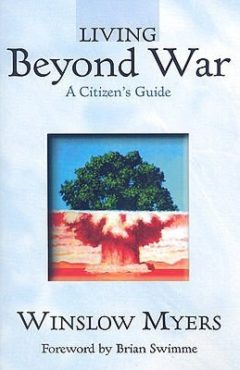 To those who say that the elimination of war is a naïve and unrealistic hope, Winslow Myers points out that what is really naïve is the belief that the world can be safer in the presence of genocidal weapons and that security is increased when more powerful nations are free to invade weaker ones to prevent further proliferation.

While the power to degrade and destroy gets a good deal of play in the media, Myers suggests that the even more powerful drive to sustain life may soon reach a tipping-point. There are now more than a million grassroots nongovernmental organizations around the globe that share the values of nonviolence, human rights, gender equality, economic justice, and sustainability — the largest mass movement in the history of the world. His hopeful book supplements the efforts of Beyond War, an organization whose goal is to introduce new ways of thinking and acting about the resolution of conflict. Both the group and the book adhere to three guiding principles: first, that war is obsolete; second, that all on this planet are one; and third, that the means are the ends in the making. Myers suggests that our opportunities for peace have never been greater. “When we succeed in changing the way we think about war, we will not only arrest our drift toward catastrophe, we will flourish in ways we have only dreamed about.”

Winslow Myers graduated from Princeton University and is an author, visual artist, and educator whose 40-year teaching career included posts at Clark University, Assumption College, the Rhode Island School of Design, and serving as chair of the visual arts program at the Bancroft School. He has served for many years as a speaker, seminar leader, and coordinator for Beyond War in Massachusetts.