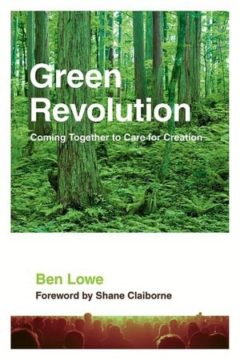 Coming Together to Care for Creation
By Ben Lowe
InterVarsity Press, 2009, $15.00

Bill McKibben, author of Deep Economy and a leader in the worldwide movement to save our planet from the ravages of climate change, has called Ben Lowe’s book “the book we need.” In its call to Christians to take up the yoke and attitude of Jesus toward caring for creation, it fills what had become a gaping chasm between the seriousness of the degradation of the natural environment and the attitudes of Christians toward their role as stewards of God’s creation.

Lowe takes Christians to task for their lack of concern for the environment and for ignoring what it really means to be a follower of Christ and member of a large family of beings who share a planetary home. “In many ways, the world tempts us to pursue blissfully ignorant lives of comfort, safety, and security for ourselves. There is very little in what Jesus teaches or models that affirms these goals, however. Instead, we are more often called to lives of intentional community, meaningful service, and joyful sacrifice for Christ and our neighbors. This has implications for all aspects of our lives.”

Lowe suggests that the first step in assuming responsibility is to remove the layers of insulation with which most of us have surrounded ourselves and to become aware of the impact that our striving for comfort and convenience has on the environment and on others. Once the facts are known, he says, we never again can claim ignorance, and our way of being in the world will begin to change — our addiction to consumption will be healed.

With reference to the American Dream, Lowe states, “God has given us another, better dream to strive for” — that of the coming of the kingdom of God in all its fullness. He shares with readers his belief that we can “tackle environmental crises without being overwhelmed, because we know that our success lies in God, and that it is secure.”

Lowe is the coordinator of Renewal, a grassroots network committed to equipping students with tools for the compassionate stewardship of God’s creation. He was active in campus and church mobilization efforts as director of outreach for A Rocha USA and has a degree in environmental studies from Wheaton College in Illinois.