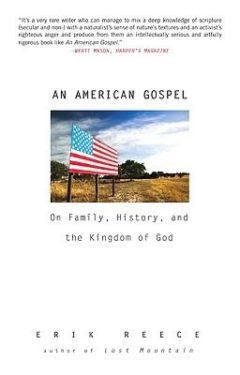 Erik Reece is the author of Lost Mountain, for which he won the John B. Oakes Award of the Columbia School of Journalism, and the Sierra Club’s David R. Brower Award for environmental journalism. He is a writer-in-residence at the University of Kentucky, Lexington, and his work appears regularly in Harper’s, Orion, The Nation, and Oxford American. In An American Gospel, Reece thoughtfully proposes that this country has its own take on the message of Jesus, and that it is based more on the writings of Whitman, Emerson, Thomas Jefferson, and the Gospel of Thomas than on fundamentalist interpretations of the canonical gospels.

As an alternative to mainstream American religion that fosters the belief that we are flawed to the point that we must mistrust both our own nature and the world that surrounds us and look to a savior who can guarantee our security after we die, the “American Gospel” calls us to be true to our nature and to find the kingdom of God in the natural world around us.

In this intimate telling of how three generations of men in his own family were affected by fundamentalist Christianity’s teachings and attitudes, the author has created a work that is touching memoir, sound philosophy, and a political view particularly well-suited to the needs of the twenty-first century. Reece’s father, a Baptist minister like his own father, committed suicide at the age of 33 because he could not accommodate himself to the discrepancies between the teachings of his church and the world. Reece, in identifying the “American Gospel,” offers a way to follow Jesus: not to guarantee oneself a ticket to heaven but to live a meaningful, sustainable, active life in the world he taught us to love.