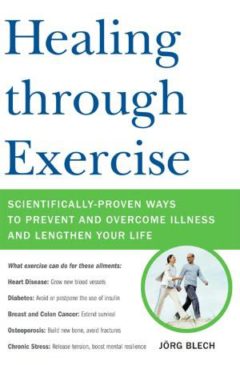 A New Way to Prevent and Overcome Illness — and Lengthen Your Life
By Jörg Blech
Da Capo, $26.00

According to science writer and author Jörg Blech, the declaration made by Hippocrates over 2,000 years ago that many diseases can be cured by abstinence and rest is being called into question by scientific papers that show that the opposite is true — that inactivity may be the greatest health problem of the twenty-first century. Blech’s position as a science writer allows him something most doctors no longer have — time to access and evaluate vast quantities of new research, both from Europe and the United States, giving evidence that exercise may not only prevent or delay the onset of the major diseases of the Western world but that it is also powerful in treating them.

According to Blech, the World Health Organization estimates that physical inactivity is responsible for two million deaths per year worldwide. “Dealing with the effects of physical inactivity is a major part of health costs,” says Blech. “In the United States, about $400 billion is spent each year to treat heart disease alone. At the same time, epidemiological studies show that at least one-third of all heart attacks would be avoided if people walked briskly for 2.5 hours per week.” If one adds all the metabolic disorders, the injuries, disabilities, and deaths caused by falls among the frail elderly, the millions of cases of depression that would respond to activity, and the drugging of so-called “hyperactive” children who have been shown to improve with an exercise program, it becomes easy to see the cost that inactivity places on the struggling health-care system and on people’s lives. Blech’s book is a call to action, both personal and social, a call to get up and get moving, with a frightening view of what life will look like if we don’t.

Jörg Blech is the U.S.-based, internationally best-selling science correspondent for the German publication Der Spiegel. He also writes for other publications, including New Scientist and the Guardian.

Commitment is an act not a word