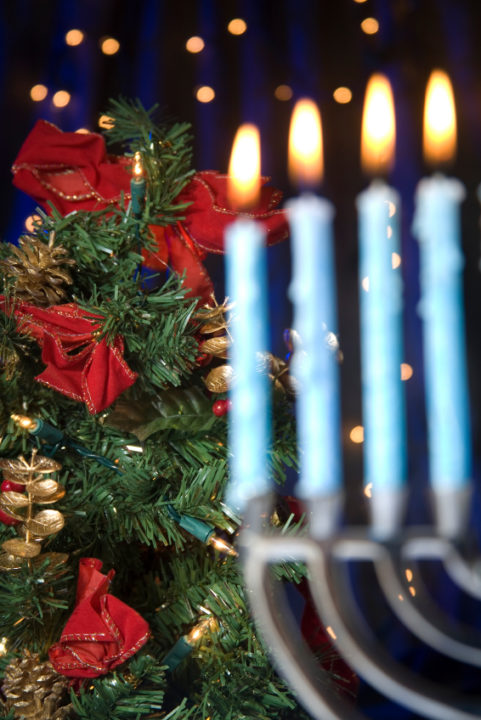 Two people emailed me this morning with questions about Christmas. I thought I’d share both their questions and my answers with you here.

I’m Jewish; my girlfriend is Christian. This Saturday we will be lighting Hanukkah candles and celebrating Christmas, but I’m a bit uncomfortable with the latter. Can you give me a Jewish way into Christmas?

This Saturday night is a Jewish trifecta: Motzei Shabbat (the transition from the Sabbath to the work week celebrated with the lighting of the Havdalah candle, the light of discernment), the fifth night of Hanukkah (celebrating the liberation of the Jews from religious, military, and political oppression), and the birthday of Jesus, the most famous Jew who ever lived. Most Jews will ignore the first, celebrate the second, and sit uncomfortably with the third while ordering Kung Po Chicken at their local Chinese restaurant.

Let me offer an alternative (no, not Thai food, something more spiritual.)

Shabbat honors the divine origins of creation (Exodus 31:15-17), and the divine imperative for liberation (Deuteronomy 5:15). Hanukkah celebrates the chutzpah of hope that liberation requires, and that allowed the Maccabees to tackle and defeat the overwhelming military might of the Syrians. And the birth of Jesus reminds us that ours is a faith rooted in the eternal hope that some day global justice, peace, and freedom will reign on earth.

As you light your Shabbat candles Friday evening, recall God as the source of creation, and commit yourself to godliness as the means to liberation. As you light your Havdalah candle Saturday night, commit to acting in a way that frees both self and others during the coming week. As you light your Hanukkah candles, vow to cultivate the chutzpah of hope that liberation requires. And as you honor the birth of the baby Jesus take hope in how one little Jewish kid (with the backing of Saul of Tarsus, a great Jewish publicist) can grow up to change the world.

I’m Jewish and I love Jesus. Not as a God or as Christ, but as a daring Jewish rabbi and prophet who took on the exploitative powers of Jerusalem and Rome. I want to honor his birth in a way that isn’t Christian but isn’t hokey either (no birthday cake with his face on it). Any suggestions?

For me, Christmas is about the birth of a Jewish boy born to a Jewish mother who is anointed by the Jewish God to liberate the Jewish people, and through that liberation to free the entire world from empire, economic and social injustice, and war, thus ushering in the messianic age promised by the Jewish prophets.

This has nothing to do with “God so loved the world that he gave his only Son, so that everyone who believes in him may not perish but may have eternal life,” (John 3:16, NRSV). That is Christianity, the religion about Jesus, and I am not a Christian. I am a Jew who follows the religion of Jesus: Love God and Love Your Neighbor (Deuteronomy 6:5; Leviticus 19:18; and Matthew 22:37-39). I would add Love the Stranger as well, but he didn’t task me (Deuteronomy 10:19). Jesus is Jewish, his teaching is Jewish, and his promise of a just world free from tyranny and fear is Jewish. So I have no problem honoring his birth.

Since you ruled out my cake idea, let me suggest adding a candle to the Saturday night flames of Havdalah and Hanukkah. Just we light the Havdalah candle to kindle the light of discernment allowing us to choose wisely between actions that heal and actions that harm, and just as we light the Hanukkah candles to cultivate in ourselves the audacity of hope that emboldened the Maccabees to light the one day’s supply of oil when an eight day’s supply was necessary to rededicate the Temple, so let us light a candle in memory of the birth of Jesus, and commit ourselves to lighting the fires of justice and compassion wherever we can, whenever we can, and however we can.

Jesus’ birthday is for me a mixture of joy, sadness, and hope. Joy in that our people has never failed to raise up heroes even in the darkest of times; sadness in that all of them failed; and hope that some day yet another will arise and this time bring the messianic promise to fruition: that all people shall sit under their grapevines or fig trees with no one to make them afraid, (Micah 4:4).