Great Time at a Meditation Retreat? 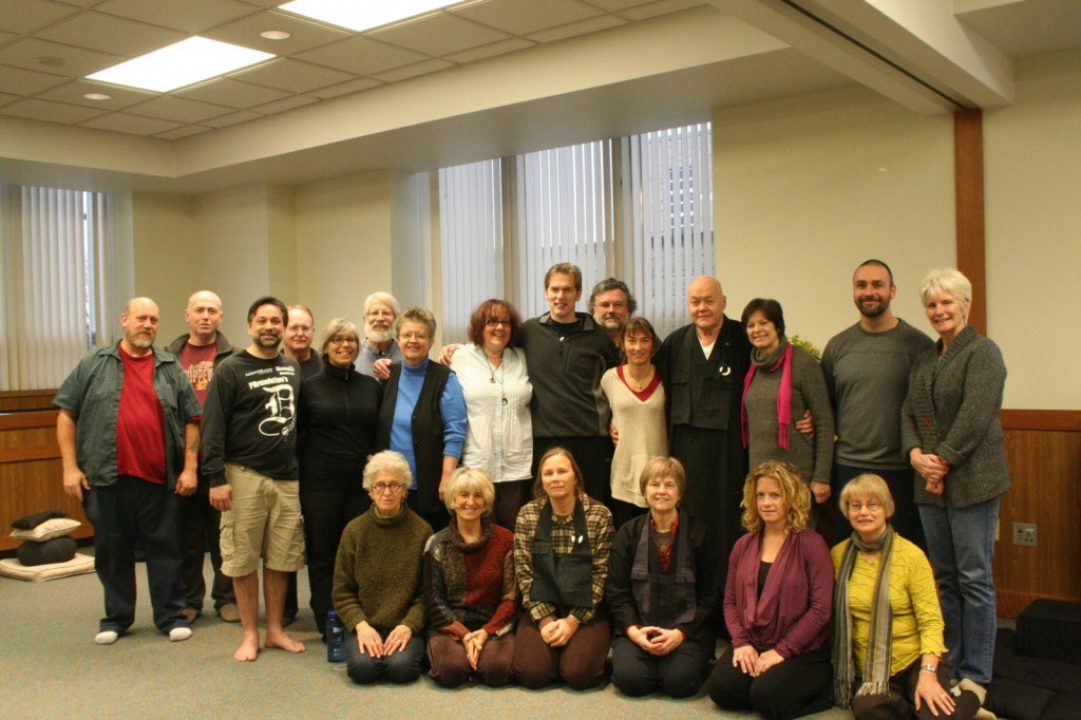 Here’s a photo of our local group at our 5-day retreat downstate, which went great, thanks to my co-facilitator Karen’s hard work. I wish we were all in the photo, but a few managed to escape the camera.

Sokuzan Bob Brown’s retreats are not silent—the point being to watch the transition from silent sitting to talking at meals and in hallways, etc. Bob‘s dharma talks led us through some traditional writings. We started with “On Trust in the Heart,” by the first century (C.E.) Patriarch Seng Tsan (Sosan), trans. by Arthur Waley—although Bob brought some alternate translations along. (I was struck by how wildly divergent the translated texts are!) As someone commented, the poem says the same thing over again in different ways, line after line. It keeps pointing toward what can’t be said. Here are few lines:

The Perfect Way is only difficult for those who pick and choose; Do not like, do not dislike; all will then be clear.
Make a hairbreadth difference, and Heaven and Earth are set apart. . . .

Stop all movement in order to get rest, and rest itself will be restless;
Linger over either extreme, and Oneness is forever lost. . . .

And so on. After my years of Vipassana training, it’s been interesting to deeply confront these writings where the intention is to unmoor the mind, to cut it loose from its linearity. Vipassana teachings—at least in my experience—are designed to be very clear and accessible. These poems and this other way of teaching intends to make me question the very possibility of “understanding” in the way I’ve thought of it:

Stop talking, stop thinking, and there is nothing you will not understand.

That’s another line from the poem. Of course we know that we don’t want to become mindless zombies. So then, in what sense are these lines meant? That’s the koan. (A koan is a saying that’s meant to jar loose linear thinking).

The meaning is not in the words,
yet it responds to the inquiring impulse.

Those lines are from the “Song of the Jewel Mirror Samadhi,” by Tozan Ryokai,

In the last Dharma talk, Bob led us through “The Heart Sutra,” another first Century poem. It’s sometimes called the “Essence of Wisdom Sutra.” It seems very important to be led through this poem, since without some prior teaching, it doesn’t appear to make sense. For example:

form is emptiness, emptiness is form,
form is not separate from emptiness. . .

Yikes! What does “form” mean? What does “emptiness” mean? What does it mean that they’re not separate? This seems so esoteric that it doesn’t on the surface seem to have anything to do with our lives. This kind of language can be off-putting at first. Taken from my own perspective, I only begin to understand this language as I spend more time on the cushion. The two are meant to go together—the meditation and the language. The language seems to be accessible ONLY through the practice.

At the retreat , we had a sewing lesson! Priscilla taught us to make the meditative stitch needed to sew a rakusu, a garment worn during sitting and services by those who have taken traditional vows. For each stitch, the sewer repeats, “I take refuge in the Buddha, I take refuge in the Dharma, I take refuge in the Sangha.” In this case, we were working on the robe Bob will wear when he receives Dharma transmission in a few years, the culmination of a Zen Buddhist priest’s training. Those who seemed to have a calling for taking even stitches came back later to do more work on this. I was not one.

Those of us who weren’t sleepy had a great time sitting in the dining room after hours talking dharma, telling jokes, eating popcorn and almonds and Lorna Doone cookies and drinking tea.

In its essence, the Great Way is all embracing;
It is as wrong to call it easy as it is to call it hard.
Partial views are irresolute and insecure. . . .

Thanks again to Diane and Mahinda, who led the 4-hour sit at the Unitarian Church in our absence. Next week we’ll be back to reading and discussing Joseph Goldstein’s One Dharma. We’re finishing up the chapter, “Purifying the Mind,” and beginning the next one, “Lovingkindness.”