Review: Haiku as Meditation in "The River of Heaven" 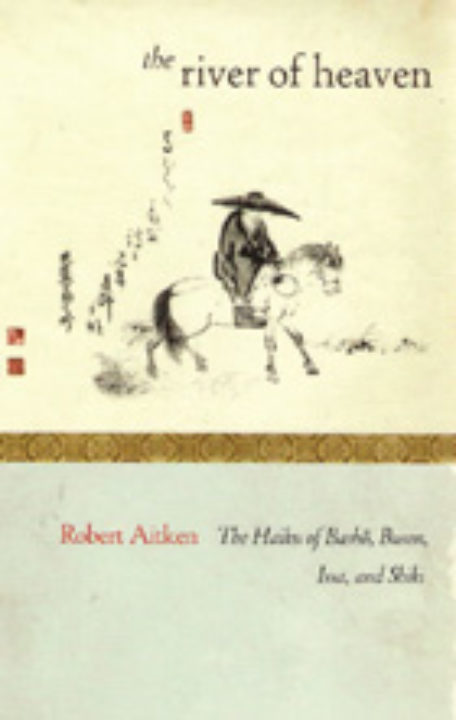 I have always found haiku, with its spare text and deeply penetrating insight, a perfect doorway to meditation. With scarce means—the haiku form allows a mere 17 syllables in which to plumb the depths of its subject—it deftly peels back the superficial to reveal a thin slice of the worlds hidden within. In “The River of Heaven,” his final work, American senior Zen Roshi Robert Aitken lovingly ties together two threads, Zen practice and haiku, to bring the delicate yet powerful perceptions of haiku masters Basho, Buson, Issa, and Shiki to light for Western eyes.

In haiku, silence is as powerful as words, and often it is in the well-placed silent spaces between words that we feel the destructive power of nature, the weight of old age and illness, and the boundless joy of skylarks “treading the clouds / breathing the haze.” Zen Buddhism, a practice noted for stillness and minimal means, shares this trait with haiku—its quietude and introspection can be shot through with blazing flashes of insight.

Aitken gives background on the often tragic and sorrowful lives and the frequent and inspirational pilgrimages of the four poets. He shares the legends, tales, and customs from which they drew and creates a circle of meaning and pleasure around their poems that includes the reader, but never intrudes upon the intimacy of the reading.

Robert Aitken died on August 5, 2010, shortly after having submitted a final draft of The River of Heaven to his publisher. A dedicated Buddhist for most of his life and the author of more than a dozen books about Buddhism, Aitken was an abbot and roshi of the Honolulu Diamond sangha in Hawaii, co-founded with his late wife, Anne Hopkins Aitken, in 1959. One of his own short verses, a gatha, quoted from his book The Dragon Who Never Sleeps, reads:

Falling asleep at last
I vow with all beings
To enjoy the dark and the silence
And rest in the vast unknown.