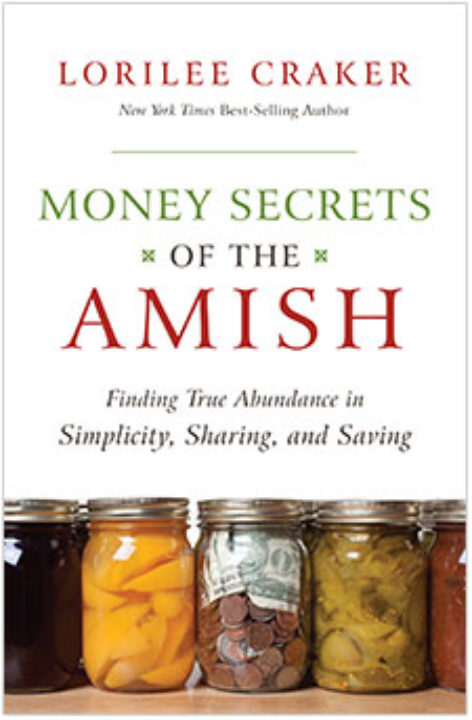 Few Americans haven’t been affected on some level by the current economic recession. Author and journalist Lorilee Craker was feeling the pinch herself when, in 2009, a book agent called her up and asked if she’d consider writing a book about Amish money habits, which allowed them to emerge unscathed from the financial crisis. At first Craker, an entertainment writer by trade, thought the idea sounded boring—but, she says, once she started the research, the lessons were fascinating.

The resulting new book, Money Secrets of the Amish: Finding True Abundance in Simplicity, Sharing, and Saving(Thomas Nelson, 2011), reveals the down-to-earth attitudes and tactics that have kept the Amish afloat while the rest of the country flounders. Throughout the book, Craker weaves anecdotes and humor with specific money-saving strategies based on Amish principles. S&H caught up with her to get a few more details about Amish economics.

Amish people are known for being tight-lipped about their lifestyle. What was the research process like for this book?
Amish people are very reserved and very fearful of appearing to be prideful. It was also hard because they don’t have cell phones and they certainly don’t have Facebook. So, it was boots-on-the-ground journalism, literally. In some cases I just showed up at their door. In other cases, I started with one contact—like an Amish banker in Pennsylvania. He introduced me to a bunch of people; he trusted me and therefore the others trusted me. I think the fact that I come from a modern Mennonite family might’ve helped, too.

To what extent does Scripture inform the Amish mentality about money?
I think they take some things very literally in Scripture; there are verses in the Bible that talk about being in no man’s debt. The Amish are really, really afraid of debt, and that’s a good thing, because we’re not afraid at all, and that’s gotten us all into trouble. Meanwhile, they sleep peacefully at night knowing they’re not in debt. They know that by not being in debt, their money is accruing interest—so they wake up richer. I think that’s a really great concept.

Have your own money habits changed after writing this book?
The Amish look at us and see people in debt, following their whims. The Amish have tons of self-control. One of their “secrets” is delayed gratifcation. They don’t see something and want to buy it right away. They see something, think about it, ask themselves “Do I really need it?” and “Can I get it somewhere else for less?” When it comes to spending, they are very careful, very slow. I’m a spender—I like to spend, I love to shop, and I’m often the victim of impulse buying. After writing this book, I did grow my self-control—my “thrift muscle,” as I call it. I think about my purchases so much more now. I’m a keen thrift shopper and garage sale hound. I had a spectacular summer at garage sales; it’s amazing what people put in their yards.

What is one of the best “secrets” you learned from the Amish?
The last chapter in the book is called “The Best Things in Life are Free.” I think there’s a mistaken notion in our culture that you have to spend money to have fun. The Amish just don’t do that. They spend time together in meaningful ways. The more I found free or cheap ways to have fun with my family, the closer we got. For instance, on a Sunday we’ll go play Frisbee golf in the park, or go for a bike ride instead of spending $100 for dinner and a movie. It’s old-fashioned fun, but it seems you bond a lot more.

What do you hope readers will take away from this book?
Just the mindset shift that really, you can get what you want but you can get it in different ways and have fun getting it—and spend a lot less. How much better does it feel to hunt around and find a treasure at a ridiculous price than to find something you kind of like that you end up paying too much for and couldn’t really afford in the first place? Some people feel like they’re above thrift shopping. Here’s what I say: I’m above paying retail prices.S&H