Death Is But a Dream: Finding Hope and Meaning at Life's End

In his book Death Is But a Dream: Finding Hope and Meaning at Life’s End, hospice doctor Christopher Kerr offers a glimpse into what happens at the end of life. “What the dying fear most is not death but the loss of a life they can recognize as their own. Ultimately, to die well is to humanize dying from an irredeemably grim reality to an experience which may also be rich in meaning and love.” 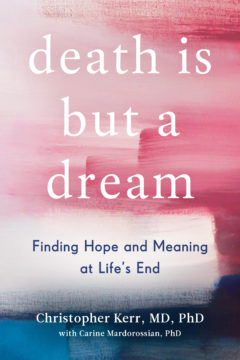 Christopher Kerr, MD, PhD, is the CEO and Chief Medical Officer for the The Center for Hospice and Palliative Care in Buffalo, New York. In his new book, Death Is But a Dream: Finding Hope and Meaning at Life’s End, Kerr shares stories of interviews with over 1,400 patients, and how dreams and visions at the end of life can help to offer hope and restore meaning to life. He shares his answers to questions about how medical training might change to better support end of life care and how dreams differ throughout phases of life.

S&H: In Death Is But a Dream you write, “It has become easier to live longer, but harder to die well.” What does it mean to die well?

Christopher Kerr: The philosopher Rainer Maria Rilke defined "dying well" when he said “Help me to my own death. I don’t want the doctor’s death—I want my freedom.” Dying needs to be defined as more than failing organs and medical futility. It is the closing of a life and an experience in which the patient must have a say. Medicine alone cannot address what a person goes through in the transition of life to death.

Amid our current medical excesses, there is an even greater need for spiritual renewal in patient care. What the dying fear most is not death but the loss of a life they can recognize as their own. Ultimately, to die well is to humanize dying from an irredeemably grim reality to an experience which may also be rich in meaning and love.

How might medical training change so that those in the medical profession can begin to better promote patients’ psychological and spiritual wellbeing at the end of life?

Compassion and empathy are the instincts which bring students into medicine. Medical school must fan those embers by emphasizing two principles in medical training.

First, good end of life care requires the physician to embrace the role of comforter and honor the principle of non-abandonment. Hippocrates said “cure sometimes and treat often; comfort always.” Yet our medical culture has become progressively more death-avoidant and is often difficult to recognize or acknowledge the patient for whom there is no basis to treat or intervene. Not surprisingly, we have a widening discrepancy between the care that is needed and the services that are delivered. The young doctor yearning to cure is admirable but cannot obscure the obligation to also provide comfort in the absence of cure.

The second priority in medical education is to train young doctors to embrace a person-centered model of care, a term in vogue but that less commonly translates into practice. Patients suffer in totality, not parts. If patients do not compartmentalize between physical, emotional, psychological, and social sources of suffering—and they don’t—then neither should we as their doctors, particularly at the end of life.

Dreams can be meaningful throughout a person’s life. What are the differences between dreams during, say, the middle of life and pre-death dreams?

We tend to think of aging in terms of physical changes, but time also alters our responsibilities to others as well as our perspective or vantage point. The aged look back on a more completed life and their pre-death experiences largely center on reunion with those they have lost along the way. Younger patients are out of sync with their life cycle and often report pre-death dreams that feel more like “unfinished business.” Although dying at a young age is unnatural and an indescribable tragedy, such patients have a remarkable capacity to find comfort in spaces where they can still be whole—often in their dreams.

How can a person become more attuned to the significance of a loved one’s pre-death dreams and visions? How can we recognize them? What, if anything, should we do after we become aware of them?

Let’s start with the notion that there is more to dying than the suffering we observe—there are also the unseen, subjective experiences of dying, a perspective that we may not understand but should absolutely respect. We should also recognize that dying is a paradox: despite a failing body, a dying loved one may be emotionally and spiritually alive and even vibrant. My advice is to create permission or space for such experiences to be shared rather than suppressed. Dying is isolating but perhaps it can be less so. Patients should be reassured that pre-death dreams are near universal and overwhelmingly comforting. This approach benefits the patients as well as their loved ones who can gain from the insight. For example, often an adult child hears about the people who mattered to their elder parent when they were themselves children. And of course, as the data suggest, what benefits the patient also benefits their loved ones. The two are linked.

You have gathered data on pre-death dreams and visions based on the direct testimonies of dying patients. What are the next steps in this research so that it might eventually be taken seriously by the medical establishment?

Our first challenge was to publish data which validated what our patients were reporting. This meant using standardized questionnaires that recorded variables such as the frequency of dreams/visions, the content or themes, degree of realism and comfort as well as changes in content as patients approach death. Our next series of questions examined whether pre-death dreams were more than just comforting. In other words, could the dying experience contain elements of posttraumatic growth. In fact, those dreaming at the end of life scored higher in every category of posttraumatic growth than patients who were not dreaming. The implication is that, up until the end of life, patients demonstrate a capacity for growth, insight, and adaption that defies their physical decline. Finally, we are looking at the effects of patients’ end-of-life experiences on those they love. Not surprisingly, what benefits the patient also benefits their loved one. We have over 700 survey results, and the responses are remarkable. The bereaved reported that their loved one’s end-of-life experiences helped them with accepting loss, working through the pain of grief, adjusting to their new world without the deceased, and maintaining the bond with their loved one.

Are there cultures that take pre-death dreams and visions seriously?

The importance of pre-death dreams has been documented throughout history and across cultures, from the ancient civilizations of China, India, and Egypt to the aboriginal bands of Australia and the South Pacific. Many believe dreaming to be primarily spiritual in nature and emphasize the connection between dreaming and death. It is thought that sleep is when we are free to perceive other realities. Although the beliefs vary, most also view dreams as a means of maintaining contact with those who have passed and that the deceased may return to offer guidance and support. Clearly other cultures demystify the role of pre-death dreams and allow for connectivity between lives whether living or dead.

What are the limitations of science when it comes to understanding the totality of the dying experience?

By definition, dying occurs after life has exceeded the limits of curative medicine. Dying is the time when nature takes its rightful place, maybe beyond the reach of science. Instead, it represents a culmination of spirituality, returning distant memory and indescribable emotion. These are difficult to medicalize and I hope that a lack of scientific evidence neither diminishes nor invalidates what the dying so clearly identify as their authentic experience. The other temptation is to examine the dying process as a harbinger of things to come. But dying is a mystery onto itself. I wrote the book in part because there is something remarkable about the dying process outside of its relationship to existential questions.

A review of Death is but a Dream is featured in our March/April issue and can be found here.

Sam Mowe is a writer living in Portland, Oregon. His interviews have also appeared in Tricycle: The Buddhist Review, and The Sun. He is also the editor of Lineages, a publication of the Garrison Institute. Sam is a regular contributor to Spirituality & Health.