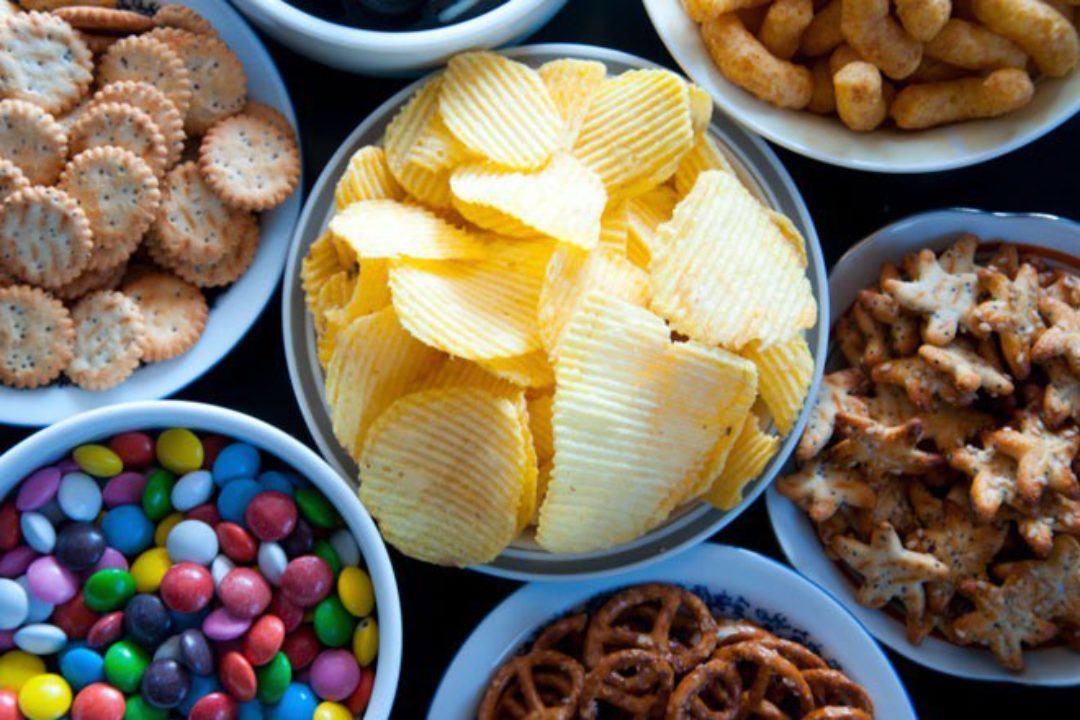 You’ve heard of a snack attack. Well, we’re striking back at the snacks, tossing all things energy sapping and low in nutritional value, and replacing them instead with healthful, tasty alternatives.

What’s lurking in your cabinets at home and desk drawer at work? If you’re like most people, it’s instant soup packets, sugar free hot chocolate, and maybe a squishy granola bar dating back to Obama’s first term. It’s time to toss these empty snack foods, and instead create a trove of energy replenishing mini-meals. Here are some normal snacks, and suggestions for healthy swaps:

Instead of: Lukewarm, leftover slice of pizza from the conference room.

Swap in: Fill up on brown rice, which stabilizes blood sugar. One cup of brown rice has 80 percent of the recommended daily allowance of manganese, which helps the body synthesize fats. Top with furikake, a salty Japanese seasoning that includes seaweed, to add flavor.

Instead of: Tearing open a packet of Skittles.

Swap in: Grab some organic grapes. Researchers found that consumption of grapes and grape juice improved blood flow to parts of the brain, improving people’s memories and verbal recall.

Instead of: Plop-plop fizzing an artificially flavored vitamin B drink.

Swap in: Raw cashews, which contain thiamin, riboflavin, niacin and biotin (vitamins B1, B2, B3 and B7). Cashews are also a good source of iron, which will also boost your energy.

Instead of: Reaching for that mid-afternoon coffee.

Swap in: Have a cuppa. Black tea helps lower the amount of the stress-related hormone cortisol in your body, according to researchers at the University of College London. They found that blood pressure, heart rate and self-reported stress levels all dropped off after volunteers consumed tea. They also found that tea lowered the risk of heart attack and sped up how long it took people to recover from a stressful event (annual review, anyone?).

Instead of: Nibbling mindlessly on cheese puffs.

Swap in: Plain popcorn, which recently got a nutrition promotion when researchers discovered that it has higher concentrations of a type of antioxidant, called polyphenols, than many fruits have. According to the American Journal of Clinical Nutrition, polyphenols are helpful in warding off cardiovascular disease and degenerative diseases such as osteoporosis. Dress up the popcorn with a little olive oil and nutritional yeast sprinkles, and if you want to pretend you’re at the movies, that’s fine with us, too.

Instead of: Unwrapping a sugary cereal bar.

Swap in: a half-cup of freeze-dried berries, such as strawberries. Dried berries are showing promise in preventing cancers of the esophagus and colon, according to scientists being supported by the American Institute for Cancer Research.

Instead of: Diving into the chips and dip.

Instead of: A sugary peanut butter smoothie from across the street.

Swap in: Something creamy, but less high impact. If you’re craving peanut butter, top some wholegrain crisps with two tablespoons of peanut butter or almond butter.

Kathryn Drury Wagner is a freelance editor and writer based in Los Angeles. She blogs about workplace issues at CareerContessa.com.